× Note: The Solar Forecast Arbiter is now under the stewardship of the Electric Power Research Institute (EPRI). For more info, contact forecastarbiter@epri.com.

User, permission, and role administation can be accessed by clicking the User Administration link in the Account menu in the top right corner of the site.

These pages allow organization administrators to view and manage permissions. Users without administrative privileges may not see anything on these pages.

When we talk about data access we often fail to distinguish between types of data. That’s sometimes ok for plain communication, but a good data control system requires precision.

Data access on a site only controls access to the site metadata (e.g. location, plant capacity). It does not control access to any observations, forecasts, or reports associated with that site.

Most users will already be familiar with observations and forecasts but note the data access on metadata is distinct from access on the time series values:

Reports are also comprised of metadata and values:

Users are described by their user name and their organization affiliation. See User Classifications for more information on users.

The data types that support the access control system are:

This pattern is known as Role Based Access Control. The next sections discuss permissions and roles in more detail.

Permissions may also apply to all current and future pieces of similar data within an organization. For instance, a permission may allow a user to post values to all of an organization’s forecasts. If the organization defines a new forecast, it will automatically be included in this permission.

Permissions are added to roles to enable users with that role to perform the permission’s action. A permission can only allow actions on data owned by the organization in which it was created.

The Permissions Reference Table describes the full set of permissions.

Clicking on an individual Permission will list information about it and the objects it applies to. 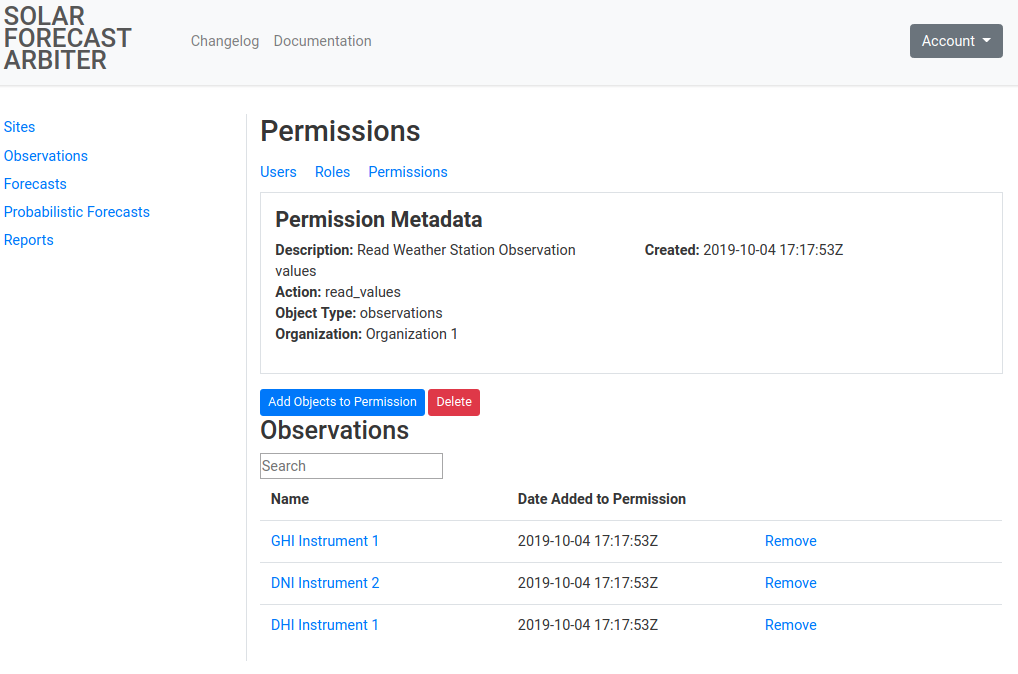 Roles are a collection of permissions that may be granted to a user. Granting a role permits the user to perform actions defined by the role’s permissions.

Roles may also be created to share data with users outside of the organization. For instance, a utility may create a role “Share with forecasters” that includes permissions for reading site metadata, observation metadata, and observation values.

The default roles are:

Clicking on an individual Role will list information about it and the permissions associated with it. Use the tabs below the metadata section to switch between the list of permissions on the role and a list of users the role has been granted to. 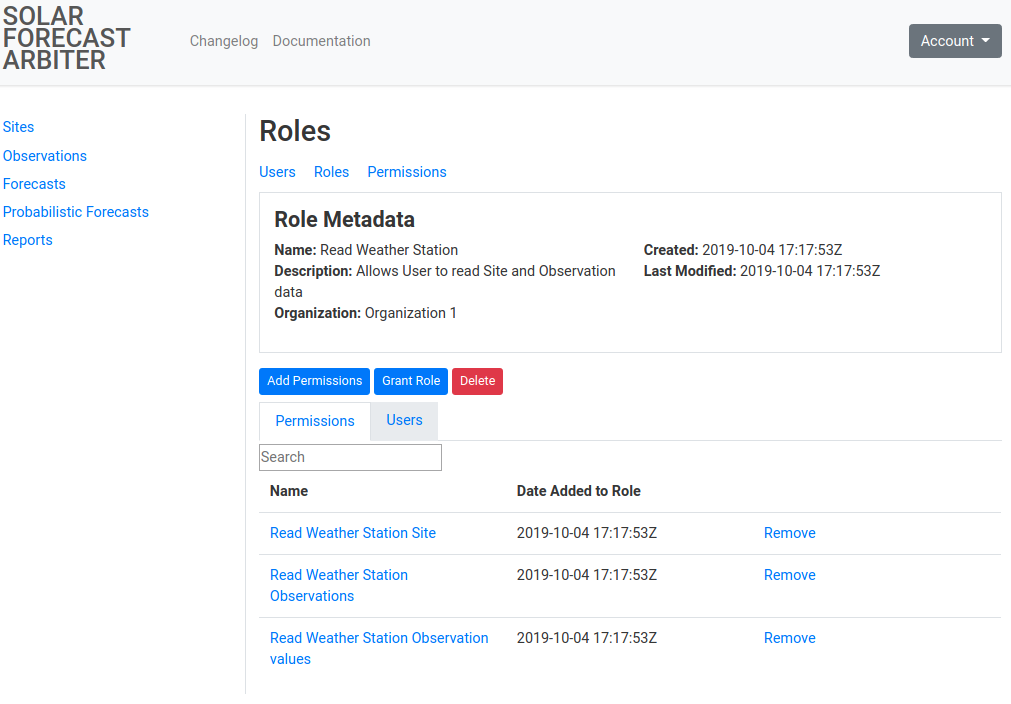 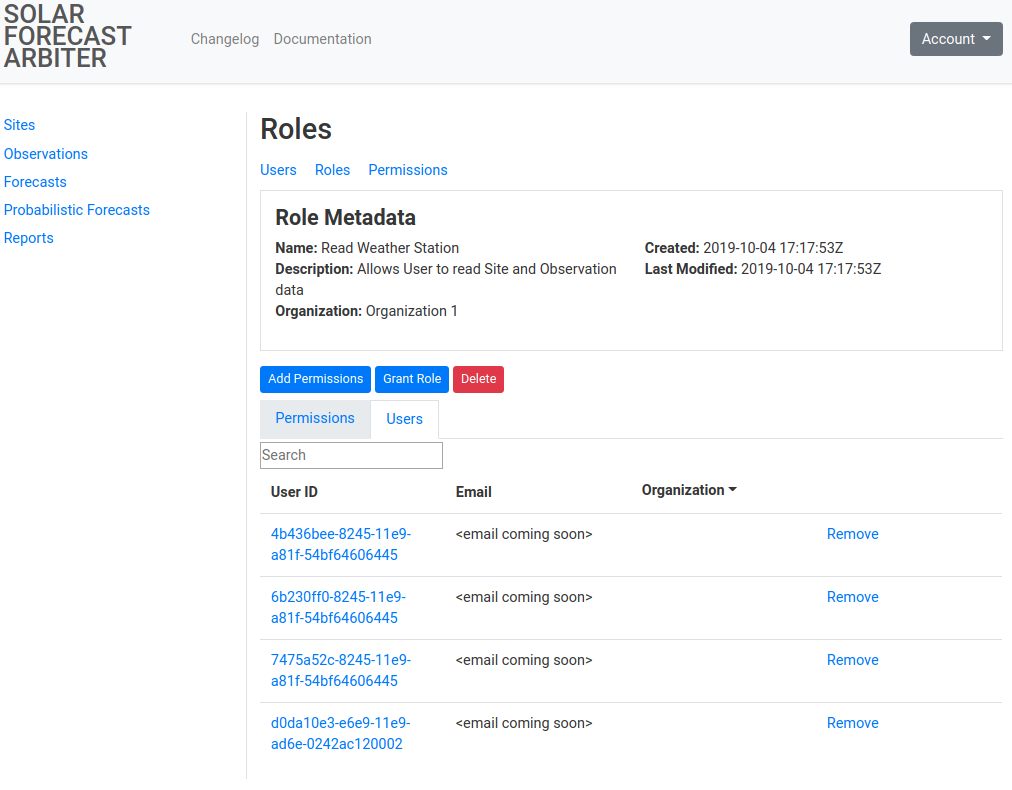 To give users permissions on data, an administrator grants a role to a user that contains the relevant permissions. Users may be granted multiple roles. Administrators may also revoke roles to remove the ability of a user to interact with data.

Grant Roles to a User

Organization administrators may grant roles to other users through several interfaces.

Roles can be any granted to any user, including those outside your organization, through the role administration interface.

Users within your organization

Roles may be granted to users within your organization through the user administration interface.

Revoke Roles from a User

Organization administrators may revoke roles to other users through several interfaces.

Roles can be any removed from any user, including those outside your organization, through the role administration interface.

Users within your organization

Roles may be revoked from users within your organization through the user administration interface.

Add Permissions to a Role

Remove Permissions from a Role

Users of the Solar Forecast Arbiter are described by one or more of the following classifications.

Administrators may grant roles to members of other organizations. The Solar Forecast Arbiter will reject any attempt to grant roles to users that are not affiliated with an organization (i.e. their employer has not signed the platform Data Use Agreement).

Solar Forecast Arbiter users are added to the Unaffiliated organization by default. Unaffiliated users will have access to the reference data set but may not gain further access until they have joined an organization that has accepted the data use agreement.

A point of contact may coordinate with framework administrators to:

Users that are not affiliated with an organization only have the permissions necessary the browse the reference data set. They cannot create new metadata or upload data. Nor are they allowed to see data shared by other users.

The following examples illustrate how to apply the Solar Forecast Arbiter’s role based access control to common situations. Modify them to suit your specific application.

Set up a New Organization

Analyst Alice at Utility X wants to use the Solar Forecast Arbiter. She creates an individual user account and browses the reference sites, forecasts, and reports. Now she wants to upload data and analyze her own forecasts. To do this she’ll need someone from her organization to sign the Data Use Agreement that protects the data rights of her organization and limits the liability of the Arbiter operator, the University of Arizona.

Alice downloads the Data Use Agreement and provides it to her legal team. Alice reminds her legal team that the DUA is not negotiable, but dozens of well-known entities have signed the agreement.

The legal team signs the agreement and Alice emails it to admin@solarforecastarbiter.org. The Arbiter administrators ask Alice:

The Arbiter administrators set up the organization as requested and inform Alice that they’re all set to use the Arbiter for their own analyses and it’s no problem to add additional users at a later date.

Roles within an Organization

Alice is an administrator of the Utility X organization within the Solar Forecast Arbiter. She needs to set up data access for a couple of her team members:

These permissions will apply to all current and future data within the organization, so Alice can use the Arbiter’s preconfigured roles.

Carol and Marco now have the intended data access.

Alice at Utility X would like to find vendors to provide forecasts for several solar power plants. She doesn’t yet want to share data - just the metadata.

To share the site metadata, she’ll need to create a role with read permissions for the sites, then grant that role to the interested forecast providers. The steps below illustrate this process.

Now Alice is ready to create a new role and add the new permission to it.

Finally, Alice is ready to grant the role to other users, thus giving them the permission to view the Power Plant A and Power Plant B sites.

The forecast providers can now see these power power plants on the Sites page. They’ll easily find the new power plants if they click the “Provider” button and deselect the Reference data set.

The Solar Forecast Arbiter does not alert users when new roles are granted to them, so Alice should let the other users know the data is now available to them.

What would happen if Alice defines a new observation, such as AC power, and uploads the time series data? Will the forecast providers be able to see it? No. While that could be convenient in some circumstances, it could also pose a data security risk in other situations. Alice can define new observations or forecasts at these sites, or use them in a report, without any fear of data becoming visible to the forecast providers. Only the site metadata will be visible to the providers. If Alice wants to share additional metadata and data with the forecast providers, she’ll need to add new permissions to the existing role or she’ll need to create new roles and grant them to the providers.

First Vera needs to create a forecast and a report to share.

It’s now time for Vera to collect the new permissions into a role.

Vera can now grant the role to Alice so that she can review the report.

Alice can now review the report, but the report will not contain the time series values. Alice can also find a link to the forecast metadata by navigating to the list of forecasts at the Table Mountain site.

Alice is intrigued by the forecast performance and wants to see the time series values to get a better understanding of the forecast. Utility X and Forecaster Alpha work out their own non-disclosure agreement independenly of the Solar Forecast Arbiter. Vera can now share the time series data with Alice.

This table gives a brief description of the effect of each type of permission on each data type. In certain circumstances, a combination of permissions may be necessary to perform a particular action.